Sri Lanka sought Sunday, January 9, to reschedule payments of its growing Chinese debt given the sluggish economy due to the novel coronavirus pandemic. During talks with Chinese Foreign Minister Wang Yi, President Gotabaya Rajapaksa asked his Chinese counterpart to defer loan payments that the cash-strapped Southeast Asian nation is not in. able to pay. The president of Sri Lanka has therefore called on China to restructure its loans as well as access to preferential credits for imports of essential goods, the Associated Press reported. In addition, the agency said Sri Lanka’s projects funded by Beijing are not generating any income and hence the country now needs the concessional credit facility for imports so that the industry can operate without interruption.

President Gotabaya Rajapaksa told Chinese Foreign Minister Wang Yi that it would be “a great relief for the country if attention could be paid to restructuring debt repayments as a solution to the economic crisis that has arisen in the face of the COVID-19 pandemic. “, read a statement from the office of the Sri Lankan president on Sunday.

The Sri Lankan leader also asked for help from Chinese Foreign Minister Wang Yi to jumpstart China’s trip to Sri Lanka in a secure bubble amid the pandemic for the country to secure income from tourism. During his visit, the Chinese minister accompanied Sri Lankan Prime Minister Mahinda Rajapaksa, brother of the president to the port city of Colombo, the reconquered island built with Chinese investments.

China and Sri Lanka have launched 65 boats in the waters to commemorate 65 years of bilateral diplomatic ties. In his speech in Port City, Wang agreed that the COVID-19 pandemic has made economic recovery difficult, but did not announce any relief measures. The Chinese Foreign Minister arrived in Sri Lanka on his multinational trip from the Maldives. His trip includes visits to Eritrea, Kenya and the Comoros in East Africa. 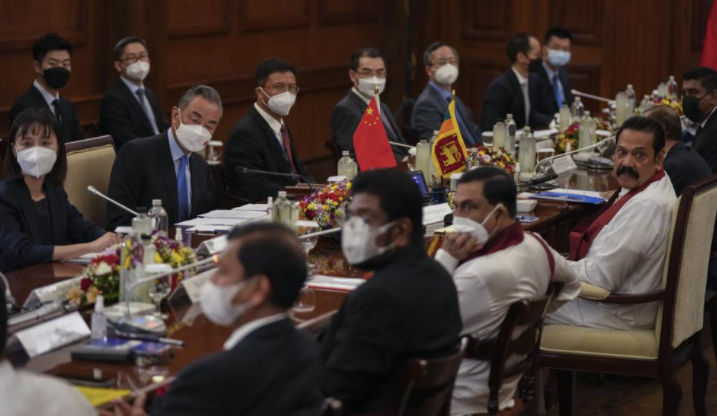 China has completed several infrastructure projects in Colombo as the country’s leaders urged the Chinese Communist regime to implement its ambitious Belt and Road expansionist project with several projects, an issue that has long raised concerns in India. Columbo, now unable to repay the debt, would be recent in the Chinese “premeditated scheme” of a debt trap, such as Panama which has gone to the domino effect of Beijing, and fifteen Latin American countries which have also hosted China’s BIS, according to reports.

Beijing has led an aggressive campaign to find global infrastructure as part of the B&R initiative. Several countries like Sri Lanka have borrowed millions of dollars in loans for large-scale infrastructure projects with the participation of Chinese companies. Last year, after Uganda was unable to pay its debt to China, a loan of US $ 207 million it took out in November 2015 from China’s Exim bank, China struck a deal that would require the country to cede its only international airport to Chinese lenders. .

“The Ugandan government has failed to convince Chinese lenders to renegotiate the toxic clauses of the 2015 loan, leaving Ugandan President Yoweri Museveni in limbo,” Guayana Kaieteur’s news agency reported. He cited the Uganda Civil Aviation Authority (UCAA), which berated China for certain provisions of the funding agreement that “required that Entebbe International Airport and other Ugandan assets be seized and taken back by Chinese lenders during an arbitration in Beijing ”.

After 36 years, the Marcus line seems to be coming back to life