The Russian Ministry of Defense (MoD) on Saturday presented the highlights of the military aircraft which will be displayed during its Victory Day parade on May 9. No less than “77 planes and helicopters” will fly over Moscow’s Red Square to mark the number of years since the Soviet Union defeated Nazi Germany in World War II. In the wake of the ongoing Russian assault on Ukraine, the flypast will also display MiG-29SMT fighters in the shape of the letter “Z” to support Russian forces carrying out the “military operation” in its ex-Soviet neighbor .

“For the first time, eight MiG-29SMT fighter jets will fly over Red Square in the form of a letter ‘Z’ in support of Russian military personnel participating in a special military operation in Ukraine,” the Defense Ministry said. Russian, quoted. by CNN.

According to a statement released by the Russian Defense Ministry, the flypast will see Tu-95MS strategic missile carriers, the TU-160 “White Swan” paired with an Il-78 tanker aircraft. Other than that, notable fighter jets are the MiG-29, Su-35S and MiG-31 fighters, CNN reported. In addition, the Russian forces will present the latest fifth-generation Su-57 aircraft and Tu-22M3 long-range bombers. Last but not least, the ministry said, there will be an Il-80 airborne command post, Ka-52, Mi-28-N and Mi-8 helicopters. Also, a rarely seen Il-80 Doomsday aircraft capable of withstanding a nuclear attack. The world’s largest transport helicopter, the Mi-26, will also be featured in the May 9 parade.

[Russian warplanes fly over Red Square during a dress rehearsal for the Victory Day military parade in Moscow, Russia, on May 7, 2022. Image: AP]

On May 7, Russian troops held their final dress rehearsal before the country’s annual Victory Day parade. Russia will commemorate the 77th anniversary of what it calls the Great Patriotic War. Thousands of soldiers will march through Moscow’s Red Square on May 9 (Monday) and will be followed by a display of artillery and armaments. The parade will take place during the third month of Moscow’s “unprovoked” invasion of Ukraine. According to information from the Center for Defense Strategies based in Ukraine, Russia will force at least 500 Ukrainian prisoners to march on the road to Moscow. Said parade has remained a show of power event for Russian President Vladimir Putin during his two decades in power. 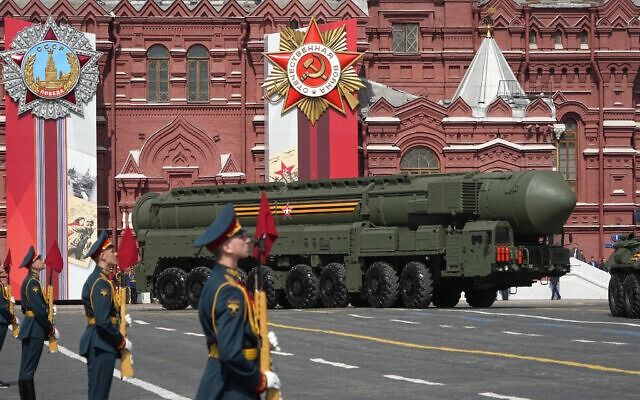 [A Russian RS-24 Yars ballistic missile rolls in Red Square during a dress rehearsal for the Victory Day military parade in Moscow, Russia, on May 7, 2022. Image: AP]

Meanwhile, patriotic fervor for the holy holiday is expected to be higher than ever after Moscow accused the West of “Russophobia”. No foreign leader has been invited to grace the Russian patriotic event following global condemnation and the recent spat with Israel, however, the Kremlin has denied reports that invitations were avoided as it is not “not a jubilee year“.

After 36 years, the Marcus line seems to be coming back to life