Morocco to approve aviation, culture and sport agreements with Israel

The Moroccan government, which normalized relations with Israel last year, announced on Saturday that it would discuss and possibly ratify two new agreements signed with Israel in the fields of aviation, as well as culture and sport.

“The [government] meeting will be devoted to the examination of two cooperation agreements between the Government of the Kingdom of Morocco and the Government of the State of Israel, signed on August 11, 2021 in Rabat, the first concerning air services with a bill approving this agreement while the second provides for cooperation in the fields of culture and sport, ”the government said in a statement reported by the Moroccan Press Agency.

Lapid was in Morocco for the first official visit by a senior Israeli diplomat since 2003, and the highest-level trip since an agreement was signed by Jerusalem and Rabat last year to restore relations after about two decades.

The Trump administration negotiated the Israel-Morocco normalization agreement, reestablishing ties that were severed after the outbreak of the second intifada in 2000. However, the 2020 agreement did not establish full diplomatic relations.

By registering, you accept the conditions

Morocco reportedly hesitated to move forward until it was assured that the Trump administration’s recognition of its sovereignty over the disputed region of Western Sahara would be confirmed by current US President Joe Biden.

Once the new administration assured Rabat that it would not cancel the recognition, Morocco reportedly decided to go ahead with the normalization deal.

On Sunday, the Foreign Ministry’s appointments committee appointed Israel’s charge d’affaires in Morocco as the country’s permanent ambassador. David Govrin, who has headed the diplomatic mission in Rabat for the past two months, will now head the completely renovated embassy.

In August, Lapid inaugurated the Israel Liaison Office in the Moroccan capital. He added at the time that Bourita was due to arrive in Israel in October or early November to open the Moroccan embassy in Tel Aviv. 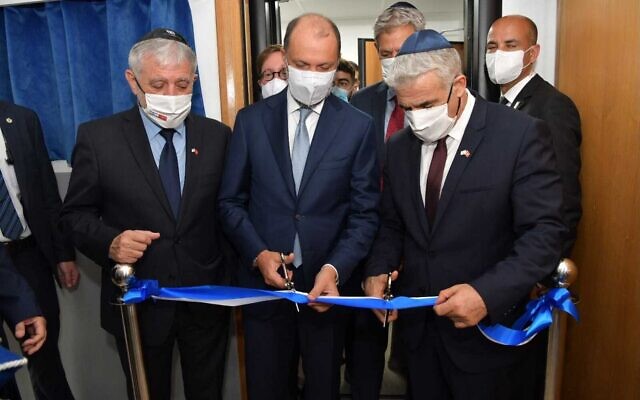 The first direct commercial flights between Israel and Morocco took off in July, seven months after the countries agreed to normalize and open reciprocal diplomatic offices.

The deal with Morocco is part of a wave of diplomatic deals between Israel and Arab states, including the United Arab Emirates, Bahrain and Sudan.

Lazar Berman contributed to this report.

Learn Hebrew in a fun and unique way

You get news from Israel … but do you TO HAVE this? Here is your chance to understand not only the big picture that we cover on these pages, but also the critical and juicy details of life in Israel.

In Streetwise Hebrew for the Times of Israel community, each month, we will learn several familiar Hebrew phrases around a common theme. These are small audio Hebrew lessons that we think you will really enjoy.

Are you serious. We appreciate this!

We are really glad you read X Times of Israel Articles in the past month.

That’s why we come to work every day – to provide discerning readers like you with must-see coverage of Israel and the Jewish world.

So now we have a request. Unlike other media, we have not set up a paywall. But since the journalism we do is expensive, we invite readers for whom The Times of Israel has become important to help support our work by joining The Times of Israel community.

For as little as $ 6 per month, you can help support our quality journalism while benefiting from The Times of Israel WITHOUT ADVERTISING, as well as access to exclusive content reserved for members of the Times of Israel community.